Innovative neurosurgery and Focus  Shockwave intervention takes a severely compromised patient from under a life of pain and drug therapy to the road to recovery.

When Michael Cornforth felt some pain in his neck, he reacted like most of us would. He rubbed it, put it down to the  stresses of work and thought about taking a few painkillers. It would all be ok in the morning. After all, what sort of damage can you do to yourself, when you’re a financial director, who spends his working day at an office screen. Nothing atypical there, and Michael isn’t the sort of person who neglects his health though. He’s astute enough to balance his lifestyle with regular workouts in the gym.

That though wasn’t how it was working out for Michael. He’d been troubled by the growing discomfort in his neck. Of even more concern, he was losing mobility in his left hand and arm. Despite seeking professional help, he hadn’t found a solution.

Michael’s quality of life had been crashing  he’d been sleeping only a few hours nightly, and his work performance was as compromised as his physical wellbeing. That was when he approached Helen How, the Edinburgh based osteopath and pioneering Shockwave specialist, who with a group other osteopaths, physiotherapists, podiatrists, and doctors have regular mentoring and continual professional development  with Storz Medical, Switzerland who researched and developed the equipment and techniques.

Over the years, Michael had developed a severe nerve entrapment condition. It was apparent to Helen that prolapsed disks were contributing to her patient’s severe discomfort and compromised reflexes. Helen knew she could help, but she also knew Michael would also need something more.

While other consultants had hoped that conservative measures would suffice, Helen realised that a more radical intervention was needed. Turning to her long-standing professional associate, Mr Ioannis Fouyas, she sent Michael across Edinburgh to meet with the eminent consultant neurosurgeon. From that point on, in a rare collaboration, Helen and the surgical team worked in partnership to change Michael’s life for the better.

Even for an experienced neurosurgeon, the case presented considerable difficulties. Struggling with debilitating pain and an increasing regime of drug therapy now including gabapentin, Michael was running out of options. Conductivity tests had shown that three crucial neck disks and nerves would need treatment. Specifically the C5,C6 and C7 locations, all of which carry high risk for the patient. This was going to be complicated surgery.

Mr Fouyas liaised with top colleagues within his unit to ensure that surgery was justifiable, despite the associated risks. Michael was also aware that surgery would not provide an immediate solution, and post operative weakness could develop, necessitating lengthy rehabilitation. Michael needed time to prepare for the complex procedure. He would need specialist help to get ready. So, in a close collaboration with Helen, Mr Fouyas referred Michael back to her for preoperative Focus  Shockwave treatment similar as used in Europe such as Norway.

The neurological nature of the surgery hangs on successful healing, with as little scarring as possible. Using the specially developed Focus Shockwave system, of which Helen is the sole practitioner in Edinburgh, she worked with Michael to get his tissues into the best possible readiness for his visit to the theatre. It’s the sort of preoperative treatment that cosmetic  surgeons consider, in order to give their patients the best opportunities for a blemish free procedure.

Bringing together the stellar team of surgeons was only going to happen once, so the race was on to get Michael prepped for his procedure. Helen was convinced that Shockwave was the only system that would get the results fast enough to make the conjunction of time, place and patient all coincide. When Michael reached Mr Fouyas’ theatre, he was a ready as he could be for the six hour marathon.

All surgery carries a risk, and neurosurgery carries as great a risk as any. Yet, much to his relief and that of the team, when Michael woke up, he had sensation in every part of his body. It’s just that, as he said at the time, it felt like he’d been kicked in the neck by a horse. His left arm felt weak and, suddenly, it dawned on him that there may be more to recovery than anyone would have liked.

That was when he learned that Mr Fouyas had made a call to his wife, to explain that Michael’s rehabilitation will be lengthy. Although this could be a temporary condition, Michael might have life-changing paralysis. Scar tissue around the neck surgery might mean that the nerves may not get the opportunity to regenerate successfully, and Michael may have to deal with a pain-free life that comes with considerable cost.

Over the next four weeks, Michael was placed under a strict regime of recuperation and close observation. Recovery was tough going. Crucially, he was still dependent on drug therapy and showing poor response to the partial paralysis. Mr Fouyas wasn’t prepared to accept that as an outcome, and to his credit, neither was Michael.

In a further collaboration, Mr Fouyas referred Michael back to Helen for a more extensive programme of rehabilitation, based on the Shockwave therapy that had proved so effective in the pre-op stages.

Helen knew that the Shockwave therapy that had helped Michael initially, could help get him fit after surgery too. So, over the next four weeks, Michael made visits to her clinic, for a post operative programme, designed to stimulate healing around the neck, coupled with intensive treatment to stimulate response in Michael’s upper body and arms. Helen even referred Michael for hyperbaric stimulation to help further with nerve regeneration. Both the surgical team and Helen How were convinced that the innovative combination of Shockwave, neuromuscular stimulation, and hyperbaric treatment for the extensive muscle atrophy would be the answer.

In a delightful outcome, that’s proving to be the case. Michael has been attending at Helen How’s clinic for an extended programme of Shockwave therapy, and has been showing some remarkable improvements. Critically, he’s been recovering movement and use of his left hand, arm and shoulder  to an almost full extent, even if the road to full recovery has a way to go yet.

Michael’s C5 C6 C7 nerve dysfunction meant he has sustained some muscular atrophy. Being a responsible, active man, who doesn’t take middle age lying down, he’s keen to get back to gym fitness as soon as possible. Counterintuitively though, that’s been something he’s been ordered to refrain from, at least for a while.

Nerve dysfunction does take a long time to heal. Mr Fouyas and Helen both agreed that strenuous activity carries too much risk in the short term. For would-be gym-bunny Michael, that’s where Shockwave has been a post-operative boon. In the same way as cosmetic surgeons refer the system, Helen has been using her set-up to promote sub-dermal healing, so that the nerves have the best chance of a full recovery.

Michael has been pain-free for the first time in over five years, with his chronic neck condition relieved. He’s sleeping through the night and rescinded all drug medication. Probably most pragmatically of all, he’s back at work, four days a week. 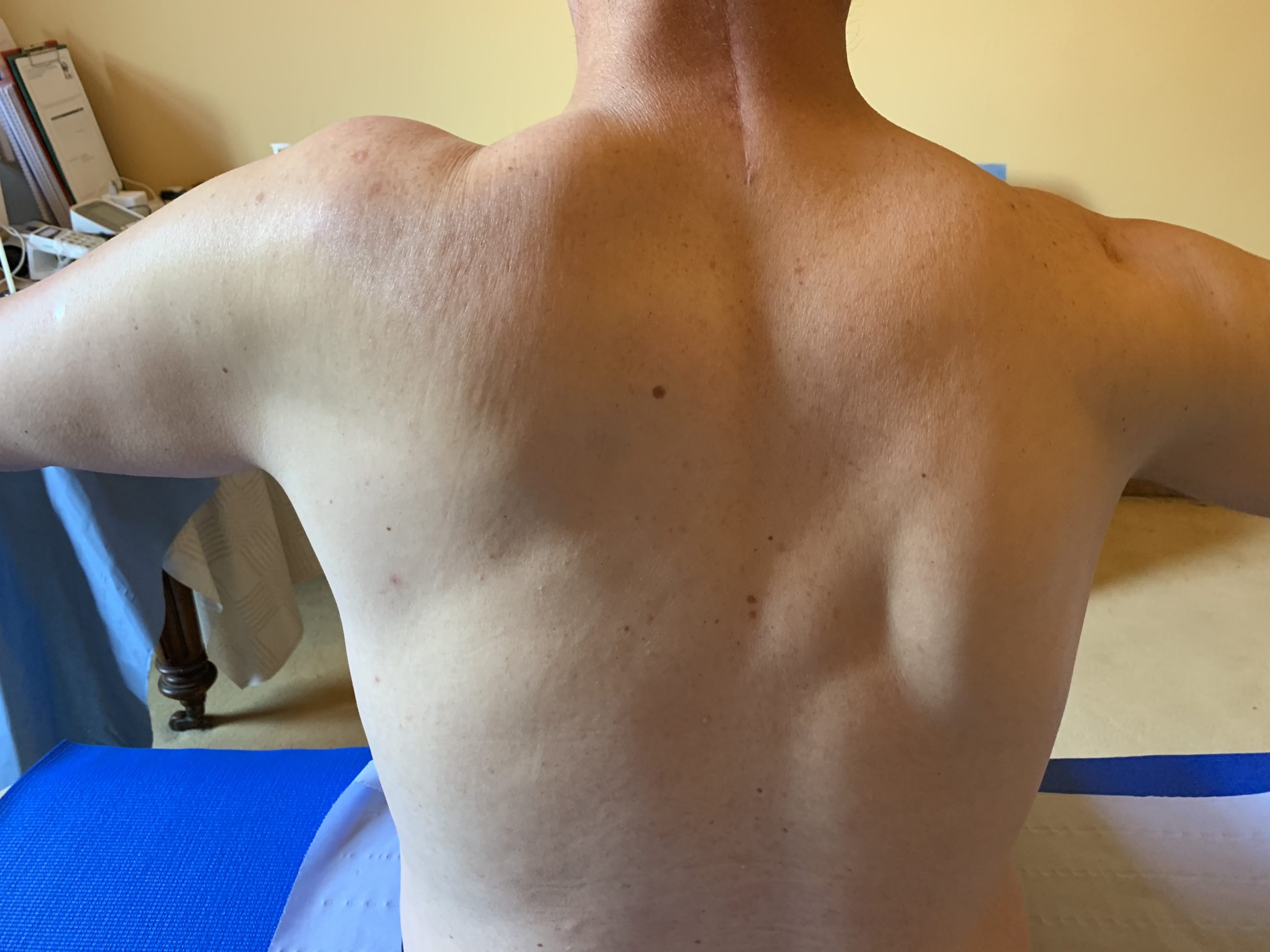